Between Longing And Desire, oil on linen mural, 2015 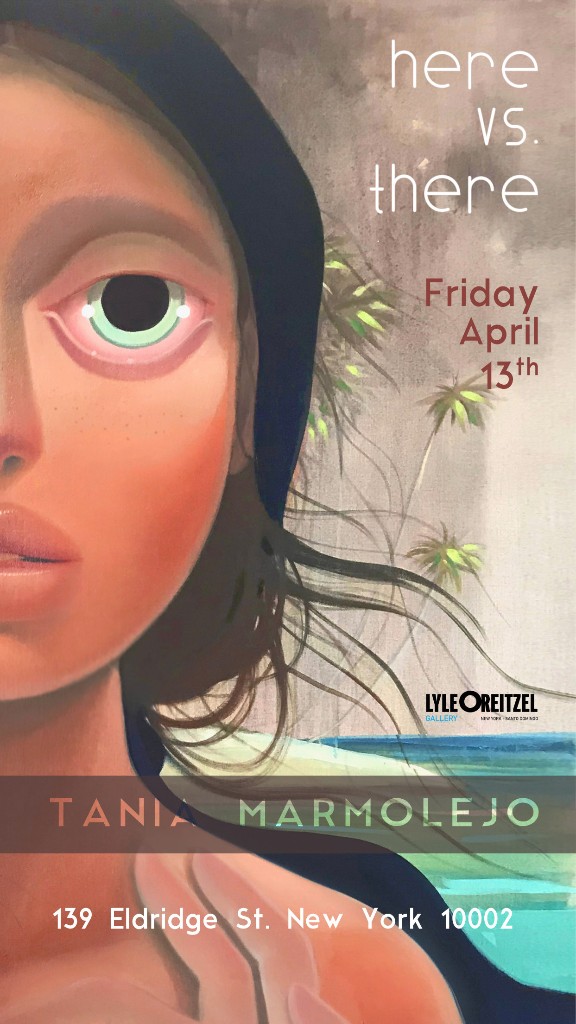 Lyle O. Reitzel Gallery presents a new Solo Show by Dominican artist living in New York, Tania Marmolejo (b. 1975), with the name “Here Versus There”. The opening will take place Friday, April 13th, 2018, in the Gallery located in NewYork.

This exhibition; ‘Here Versus There’, displays an exquisite collection of recent drawings and paintings by Tania Marmolejo. Influenced by her mixed heritage, this body of works is heavily inspired by her Swedish and Dominican upbringing. The large-scale ambiguous female facial expressions in her paintings explore issues of gender and her identity as a Scandinavian Caribbean female artist.

“I believe in the middle ground. Not the tame, ‘I give up’ middle ground, but the tense, uncomfortable point that provokes reflection and thought when confronted with opposing ideas, emotions, and forces. In Here Versus There, I search for that ambiguous middle point between opposing forces in myself and communicate them with the viewer, hoping to provoke, in turn, a mirrored feeling. The minimalist drawings which are the beginnings of my painting process may become a spider’s web of complicated storytelling of opposing thoughts or may become an ambiguous, anxious expression in a painted character eager to tell her story but not certain that she should. In the center (or end) of it all, are landscapes that still do not manage to escape the opposing forces, trying to be peaceful and yet anxiously narrative themselves, caught between an eternal Here Versus There.” – Tania Marmolejo

Tania Marmolejo studied Fine Arts, Graphic Design and Illustration in Norway, the Altos de Chavón School of Design (La Romana, Dominican Republic) and Parsons, The New School for Design (New York). She has participated alongside Lyle O.Reitzel Gallery in PINTA New York, The Modern & Contemporary Latinamerican Art Fair in its 2011 and 2010 editions, as well as Context Art Miami 2012 during Art Basel. Marmolejo has also been part of collective shows such as “The Vagina Monologues” at Columbia Presbyterian (New York), “HYBRIDS: Dominican Art” at Queens Museum of Art (New York) and various editions of the Ibero-American Art Salon at Katzen Art Center (Washington DC).

She lives and works in New York since 1998, currently practicing textile design, selected in 2014 to represent the Dominican Republic in the Fourth Ibero-American Design Biennial in Madrid. She has worked on animations, book illustrations and recently designed an artistic tile line for Aguayo Tiles in the Dominican Republic. She is the author of three picture books.