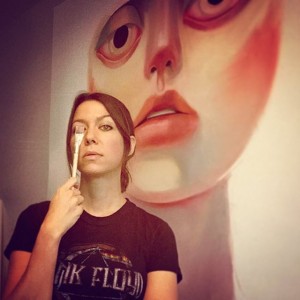 Tania Marmolejo Andersson was born in Santo Domingo, Dominican Republic (1975). Influenced by her Scandinavian and Caribbean heritage, she studies Graphic Design and Illustration in Norway and returns to the Dominican Republic to study Fine Arts at the Altos de Chavón School of Design.

In 1998 she received the Bluhdorn Scholarship and continued her studies at Parsons The New School for Design in New York, graduating from Fine Arts and Illustration in 2000.

She begins her artistic career as an illustrator for the fashion and lifestyle sections of Obsidiana magazine (New York). During these years, she also designs characters and backgrounds for MTV, PBS, Hyperion/Disney, and Scholastic Books as part of the Data Motion Arts studio’s animation team, receiving various ASIFA and CINE awards.

In 2005 she joined the group of artists at MadArts Studios in Brooklyn, NY, and District and Co. Gallery in Santo Domingo, Dominican Republic, where she participated in several group exhibitions, focusing entirely on the development of her artistic career along with the design. Since then, her work has been exhibited in numerous collective national and international exhibitions, several Iberoamerican Art Salons in Washington DC, representing the Dominican Republic, as well as in international art fairs such as Context Art Miami during Art Basel and Pinta NY, represented by Lyle O. Reitzel Gallery; and SCOPE 2016, Miami Beach, represented by Azart Gallery.

She has also designed textiles for the L’Amour by Nanette Lepore line for JC Penney, and Nicole Miller Intimates, among others, as well as an artistic tile collection for Aguayo Tiles in The Dominican Republic.

Marmolejo was selected to represent the Dominican Republic with her textile designs at the Fourth and Sixth Ibero-American Design Biennial (BID) in Madrid, Spain, in 2014 and 2018. The Bienal Iberoamericana de Diseño (BID), organized by DIMAD every two years at Central de Diseño in Matadero Madrid, is “the foremost gathering point for professionals and institutions of design in Latin America, Spain, and Portugal.”

Her artwork has been displayed as part of important national cultural campaigns in the Dominican Republic, like the household name Cerveza Presidente campaign “Celébralo con Orgullo” (Celebrate with pride) in 2020.

Important Dominican magazines and institutions have recognized her as a remarkable contemporary artist. She is part of the book “Dominicanas fuera de serie. 150 mujeres que transformaron la República Dominicana” (Dominicans out of the charts. 150 women who transformed the Dominican Republic), by Geraldine de Santis, 2021.

She is the author of the books:

She currently resides in New York, where she is devoted full-time to her artistic practice.

“Beware of Strangers of the Persuasive Kind”

“…Tania Marmolejo’s work mixes those rare qualities of beauty and mystery, modernity and timelessness, and exceeds this vanguard breeze with a very contemporary approach. Her vibrant palette of red, ocher, and gold has the warmth of the sun after a snowstorm, and has the intensity of Egon Schiele passed through a filter of Manga. This is not a simple sum of influences, but a new visual otherness.

…Indeed, innocence and seduction – or the seduction of innocence-, are pillars of her work; the intensive energy of her paintings owing to the tension between those pseudo opposites.”

“There is something oddly familiar yet distinctly unsettling about Tania Marmolejo’s enigmatic works.”

“The peculiar viewing angle and close-up cropping of her figure evokes both the claustrophobic ways in which young girls are often corseted by their parents and their consequent anxiety and emotional unease upon coming of age.

…With their innocent features and inscrutable expressions, Marmolejo’s quixotic creatures can convey complex emotions ranging from vulnerability to defiance or even regret. For Marmolejo, who adroitly combines technical precision with a vision at once beautiful and disquieting, it’s the viewer who becomes implicated as a voyeur of her dreamy narratives while witnessing the subtle struggles implicit in her works.”